This September, Canada’s longest-running and most outstanding dance company, the Royal Winnipeg Ballet, makes its much-awaited return to the Northern Alberta Jubilee Auditorium! This season, the company will deliver an incredible story of dark romance and dangerous desires based on the iconic novel of Margaret Atwood, The Handmaid’s Tale! On Saturday, 24th September 2022, this exquisite retelling of the timeless story will deliver incredible visuals and world-class talent to the stage! If you love The Handmaid’s Tale, you should hurry and grab your tickets now to see the Royal Winnipeg Ballet deliver another groundbreaking production at the Northern Alberta Jubilee Auditorium! 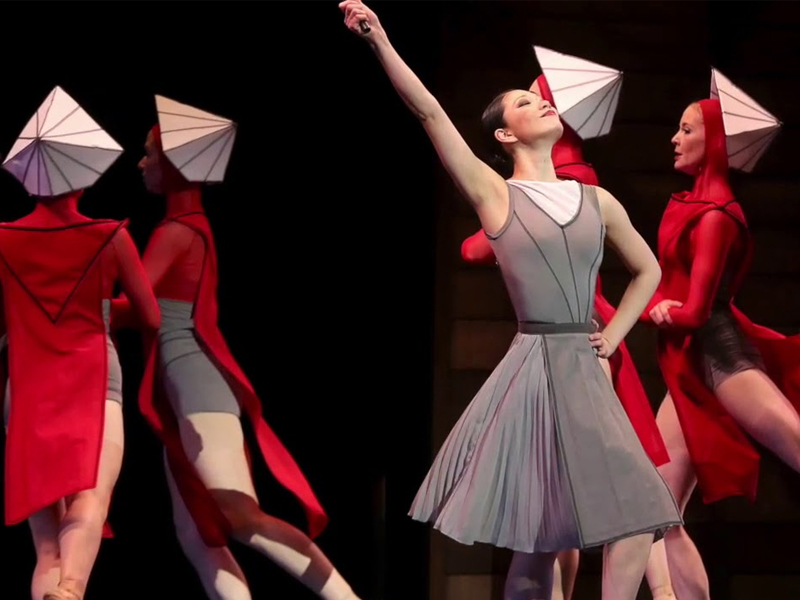 The Handmaid’s Tale is a dystopian novel by Canadian author Margaret Atwood. The book tells the story of a futuristic patriarchal society where “handmaids,” a group of women, are forced to produce children for “commandeers.” An account ahead of its time, The Handmaid’s Tale is an award-winning novel retold many times by various mediums and productions. Royal Winnipeg Ballet’s rendition of this dark, incredible story will be led by the esteemed choreographer, Lily York, with music by James McMillan, Arvo Pärt, and more. This exciting Canadian production will also employ industry experts such as Clifton Taylor and Anshuman Bhatia for scenic and lighting design, Liz Vandal on costume, and Sean Nieuwenhuis on projection design.

Lily York stated why recreating The Handmaid’s Tale has significance for her career. “Creating a ballet based on Margaret Atwood’s prescient novel, The Handmaid’s Tale has been a longstanding and passionate wish for me,” she said. “In the years since the novel’s debut in 1985, it has only grown in relevance and importance. Once seen as controversial, the story, its premise, and its characters are now fully part of our culture and our lexicon.”

For over five decades, the Royal Winnipeg Ballet (RWB) has aimed to deliver artistic and cultural experiences to the people of Canada and the world. Through outstanding productions, such as The Handmaid’s Tale, the company provides optimal entertainment through the language of dance. Since 1939, RWB has consistently taught, honed, and guided dancers to achieve their best. The company’s passion for ballet and the arts are evident through its classic masterpieces, such as The Handmaid’s Tale.

Tickets to see the Royal Winnipeg Ballet: The Handmaid’s Tale are now available! Get your tickets now and see this incredible production at the Northern Alberta Jubilee Auditorium!